Computers are an important part of digital photography. Even those who never manipulate images need one to off-load, share, display, print, sort and backup images. While any computer can be used, careful consideration greatly improves the experience of working with digital images.

What Is A Digital Photography Computer?

At its simplest, a Digital Photography Computer is a computer which serves to off load images from a digital camera and takes them through a number of steps in their life-cycle. This covers most or all of the following steps: 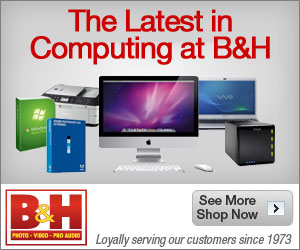 Some steps may be omitted, depending on the workflow, and they may not be done using a single computer. Printing in particular is often performed by a third-party with specialized equipment. A photography computer is not limited to doing photography tasks alone either. It should, budget permitting, make these tasks quick and efficient.

What Is The Most Important Consideration For A Photography Computer?

The one thing that photography requires above all else is an accurate display. Not all display are created equal and the vast majority are incapable of accurately showing image colors. Without reliable color accuracy, it is very difficult and time-consuming to detect when an image exhibits unwanted color casts and requires correction.

There are several different display technologies and variants. Almost all modern displays are based on LCD technology with either a fluorescent or LED backlight. OLED displays which are used on cameras already are probably coming in the near future. Even within one type of display, the quality and consistency can vary wildly. Smaller and cheaper displays, particularly those used in laptops, tend to perform more poorly.

All is not lost for laptop users since all current models support an external displays of some kind using a DVI, HDMI or D-SUB (VGA) connector. A few models use the more capable Display Port. Excellent monitors which take any of these outputs exist but certain restrictions apply. All laptops have a maximum output resolution and HDMI ports usually limit this further down to 1920x1080, also known as 1080p HD. Such limits are documented in the user manual of the laptop in question.

Just because a computer monitor is capable of showing accurate colors, does not mean it is doing so. To see accurate colors, a display must be calibrated. Not all display can be calibrated, so when choosing a monitor for photography, it is critical to look for one than can. Otherwise, one can calibrate the graphics card instead which does improves things but introduces issues such as banding. Given that calibratable displays are available for under $450 USD/CDN, there is little reason to acquire an un-calibratable monitor.

What Else Is Very Important?

All core components of a computer make some a difference in its performance. One can ease through the choice of keyboard, mouse, sound card and speakers when it comes to choosing a photography computer. While most other pieces count, computer performance works like a pipeline with a series of bottlenecks. Most significant improvements ares obtained by improving the slowest components.

Storage is normally the slowest component involved with digital photography. If you download photos from your camera to the computer using a USB cable, then getting a card reader will save you tremendous time waiting for images to arrive at the computer. You can get a multi-format reader if you have several cameras or a single format reader for a few dollars. Choose the one which reads the memory card format used by your camera:

The slowest bottleneck once inside the computer comes from the disk subsystem. Costs here start quite low but rise very quickly and can reach in the thousands of dollars depending on speed and storage capacity. Here too, laptops usually start with a handicap here since their disks usually spin slower. Some relatively expensive laptops take exception since they use SSDs which can be extremely fast. Fast SSDs are available for desktop and workstations. Compared to standard hard-drives they can be much faster but do not come as large. Several specific recommendations are shown in the next page.

Memory is much faster than disk I/O, even compared to SSDs, which is why improving storage gives the most value for your money. When working with huge files such as stitched panoramas, the disk bottleneck can be alleviated by more memory but for individual images this is rarely the case on a modern computer. At the other end of the spectrum, the fastest component is the CPU. Unless applying heavy processing like that needed by panorama software, CPU is rarely a bottleneck since it often spends its cycles waiting for data to come through the memory bus.

How To Buy A Great Photography Computer?

Among thousands of available computers and parts, quite a few which make a good computer for photography. Popular vendors sell pre-built systems, some of which are suitable for working with digital images. Desktop systems are nearly always upgradable while laptops rarely accept significant changes. One option is to get a decent general-purpose computer and upgrade it. A more rewarding yet time-consuming approach is to choose parts individually and assemble them into a digital photography workstation.

Technology evolves very quickly, so each time this article is updated, a new page will show the most up-to-date recommendations for pre-built and custom-built photography computers to suit different budgets. For this year's top picks, move on to page 2.

Neocamera Blog is a medium for expressing ideas related to digital cameras and photography. Read about digital cameras in the context of technology, media, art and the world. Latest posts links:

Your camera bag is empty. To add a camera or lens click on the star next to its name.

Your camera bag is empty.

Add cameras or lenses by clicking on the star next to their name.